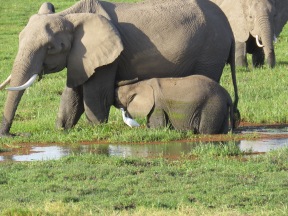 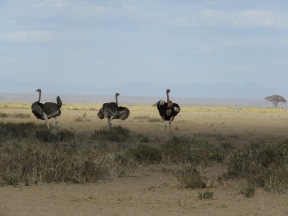 Amboseli is a national park and elephant study station. Cynthia Moss has been studying and writing about the elephant here for decades. There are numerous other animals here but the main attraction is the elephants. The hotel is in the centre of the park surrounded by a high voltage fence which keeps out everything but the monkeys which are everywhere. The hotel has hired young Masai tribesmen to scare the monkeys off with long sticks. The park is at the base of Kilimanjaro Mountain, I believe it is the second largest free standing mountain in the world ( not part of a chain).

As we entered the park we saw many of the animals at close range. The thrill of the day was the sighting of three male lions. We were watching the zebras who suddenly became very excited. We then spotted the lions moving toward the water to drink.

The elephants were profuse and delightful