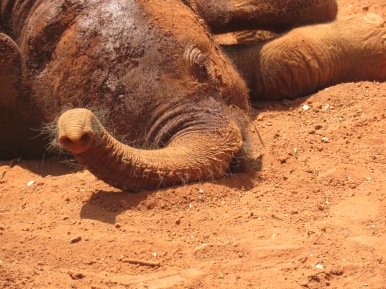 Today was spectacular!! We began the day at Karen Blixen’s house. After she left Africa, bankrupt, she returned to Denmark and became a famous author and artist. Denmark print a stamp and paper money in her honor. The bought back her African house, land and furniture and gifted it to the Kenyan government to use as a museum. The film Out of Africa was filmed on the property but all the inside shots were done somewhere else.

The next stop was the Elephant Orphanage. Orphan elephants are raised through donations by employees who are with them everyday and sleep with them at night. The mothers have died of disease, by lack of water, by poachers or hunters. Several of the babies were rescued from wells or next to their mother’s bodies. Once a day they are paraded out and bottle fed in front of visitors. They wallow in the red mud, play with a soccer ball and seek attention and affection from the visitors. After about 30 minutes of play time they are paraded back to the farm. I had placed myself so I could photograph them coming in and playing. On the return parade one of them looked in the eye, crossed the rope fence and began rubbing up against me. I was covered in red mud.

The next stop was the giraffe farm. This farm rescues and breeds the Rothchild Giraffes. You can feed the giraffes from your hand or put the feed between you lips and it will kiss you.

Our last stop was lunch at the Blixen coffee farm.

Our last stop,Masa Mara, Kenya. The ride here from the border was one of the worst,miles of unpaved roads. At one point we got a flat tire. All the luggage had to be unloaded, we stood on the side of the road while the tour guide and three drivers changed the tire in a flash. While they were working we became the circus that came to town. Children came from everywhere. the more pictures we took and showed them with our iPhones the more kids that ran down the road and stood in line.

When we arrived at our hotel we unloaded then jumped back into the cruisers for a game drive. We saw elephant families, wildebeest, giraffe but by now it has to be pretty special for us to stop. We are looking for lions, leopards, rhinos or a kill. This park did not disappoint. Over three game drives we have seen a lion eating a zebra, lions engaged in mating ritual ( the female became bored with the males lack of decisive action. She walked off and he eventually followed.). We have seen newborn warthogs and colourful birds.

The biggest treat was a surprise champagne breakfast, served by a hippo pool.

We are flying out today, we have an eight hour drive to Nairobi followed by overnight thirteen hours of airport and flight time.

I wish I had seen flamingos and more rhinos but I have a camera loaded with memories. This is the only trip outside the states that I would unflinchingly repeat.

Ps we saw three rhinos as we left. I will post pics later

We left the hotel at 5am. We arrived at a large empty field and watched our balloon being inflated. This was my maiden voyage but I remember Mom and Dad saying it was the all time favourite activity on there all time favourite trip. It was a must do for me.

Seeing the Serengeti from above is an awesome sight. With the recent rains many of the animals are gathering to cross the rivers and plains in search of fresh grazing lands. The Wilde beasts lines appeared to be miles long. The pilot said when the migration is in full swing the plains are covered with wall to wall animals. As we went over the river we could see the pods of hippos in the water.

When we landed we toasted wth the traditional glass of champagne. We were transported to an elegant picnic breakfast, traditional English food which was served by our Nubian waiter just as they would have served British hunters on a safari. It is hard to imagine the servants of long ago transporting all the China, crystal, cooking equipment, bedding, clothing and food so the hunters could eat and sleep in style.

In the afternoon we went to see Lake Victoria, second only to Lake Superior in size. It used to boost hundreds of breeds of fish. Somehow tilapia was introduced and the Nile Perch, as they call it, has taken over the lake. They are enormous in size. Lake Victoria is Spring feed and much shallower then Lake Superior.

The drive was beginning to be boring and I was thinking the topic of this blog should be the downsides of safari. The long dusty, bone rattling drive across endless miles of seeming nothingness. Miles between pit stops. The jeep rotation where every third trip you must ride in very back with shorter leg space.but better standing rotation for photography. Then there is the upside, the luxurious hotels that you would never be able to afford if you traveled on your own. The excellent guides who know that twitching of a zebra ear means that a lion is near.

Then the hunt is on, our jeep is racing with the other two to a tree with four cheetahs sleeping in the shade. (At this point Mary wants me to point out that animal researchers have made the pictures less aesthetically pleasing by putting boxes to operate research cameras against the tree. Damn those unartistic fools. Plus they cluttered a prize winning photo of a mother lion and two new born Cubs with a tracking collar on the mother. They made that picture unpostable.)

The next several hours produced two male lions sleeping on their back, two leopards in a tree, numerous elephants, birds, gazelles and a giraffe.

The long awaited rains have come, our balloon ride for Sunday has been postponed.

Not many days until we leave and we are trying to squeeze every unique animal sighting and picture opportunity in. The first few days we were so amazed that we would yell Cmama ( telling the driver to stop) every few yards. We have many shots of elephants, zebras and wildebeests. Now we are willing to ride farther for one great shot. Today that great shot was a leopard mother and baby each sunning in different spots on a large rock encropment. We had passed this spot before looking for the cats and saw nothing but today the mother stole the babies from owl nest. The mother owl’s crying drew attention to the spot and attracted several safari jeeps.

Our hotel the next two nights is luxury safari tents at Kirawira in the Serengeti. These are actual tents furnished with desks, armours covered with leather, brass and monograms. The service at the main dinner tent is like the old British safari style. At night you can here lions roaring in the distance.

Fifty years ago the Leakey’s discovered the earliest remnants of human life. Today the crater is a UNESCO world heritage site.

We had an early morning game drive. We started by watching a clan of hyenas, there are more hyenas here than any other park in Tanzania. Hyenas have pleasure of being part of the ugly five ( the other four are, wildebeest, vulture, warthog and marabou stork ). We also saw jackals, zebras, wildebeest, warthogs, hippos, assorted birds, various antelopes and assorted birds. The big find of the day was over 20 lions, 16 in one pride. The large pride was hiding, waiting for a kill when the Cape buffalo found them and chased them out of the area. Defeated the lions walked away, coming amazingly close to us.

We stopped and had breakfast at a waterhole that was home to hippos.

The weather is very dry, rain will not come until January, unless El Niño brings it early. Once it comes th plant life will all come back to life.

It was a long road from Amboseli to Lake Manyara. The boarder closing was disorganised. On both side our bus was surrounded by souvenir hawkers. One of the stops after the crossing was the Tanzanite factory. Tanzanite is blue stone that is found in only one place in the world, the foot of Kilamanjaro on the Tanzania side. Nothing for me. We had lunch at a lovely outdoor restaurant and continued the drive

On Wednesday we had a short drive through the Lake Manyarra National Park. The terrain was much different then Amboseli, this was more woodland than savanna. We saw more birds and monkeys today.

In the afternoon we went to a Masai village. The tribe is very land rich but live in a traditional way. They live in mud huts, they herd cattle and goats, they are nomadic and practice polygamy. They entertained us with a jumping contest,wedding song, and spear throwing contest.

We also visited an orphanage where the children had parents die of HIV. The children were so lovely and so needy.

Today was also Linda T’s birthday. The lodge prepared an exceptional meal and cake in her honour and serenaded her.

For some reason my WordPress will only allow me to load 4 pictures with each entry. Here are some I wanted to share

Amboseli is a national park and elephant study station. Cynthia Moss has been studying and writing about the elephant here for decades. There are numerous other animals here but the main attraction is the elephants. The hotel is in the centre of the park surrounded by a high voltage fence which keeps out everything but the monkeys which are everywhere. The hotel has hired young Masai tribesmen to scare the monkeys off with long sticks. The park is at the base of Kilimanjaro Mountain, I believe it is the second largest free standing mountain in the world ( not part of a chain).

As we entered the park we saw many of the animals at close range. The thrill of the day was the sighting of three male lions. We were watching the zebras who suddenly became very excited. We then spotted the lions moving toward the water to drink.

The elephants were profuse and delightful

What readers are saying