The important news is I am here and my luggage is with me. Said, the Limo driver picked me up at 5 am. We made it to DTW and caught a flight to Newark,as scheduled. At Newark there was talk … Continue reading →

Only a few days left. Another day another Temple and a Tea Ceremony

Daitokuji Temple was the home of the ultimate tea master. The grounds are the epitome of Zen, peaceful, perfectly designed gardens. Your ability to meditate on your life is heightened as you walk the paths. The only thing interrupting this peace is bus after bus of middle and high school students enjoying field trip season. Because of Covid Japan has been closed for about 2 years. There are no tourists anywhere. People are glad to see us because we represent the reopening of Japan to Tours. In a few weeks the country will open again to unescorted tourists. We have been most fortunate to only contend with students.

Our next stop was a real tea ceremony, hosted by an very interesting tea master. Michael was a Tae Keon Do master in Switzerland. His instructor suggested that he needed to pursue an art to balance his life. He came to Japan to learn tea ceremonies, he became a master and instructor and owns a beautiful tea house. We were his guest for a lesson on tea ceremonies. Full tea ceremonies can last several hours, ours was just over an hour. Like most things in Japan the ceremony is precise. The room is usually 4.5 mats in size, the master hangs a scroll and places flowers that convey a message to the participants. Our host explained many things about the utensils he uses. He was especially proud of his tea measure, formed from a very narrow piece of bamboo. His had a small hole probably formed by an insect. To him it represents the closeness of all things living.

Lunch was vegetarian at the Buddhist Temple.

We visited the Raku Museum to see examples of bowls and tools used in a tea ceremony.

We visited the Museum of Arts and Crafts and the Ginkakuji Temple, known for the ideals of Zen Buddhism. The gardens were extraordinary.

Lunch was my favorite stop today. I have long been taken with the belief and practice of Kintsugi.

“Kintsugi is similar to the Japanese philosophy of wabi-sabi, (embracing the imperfect). Craftsman repair broken pottery with lacquer mixed with powdered gold. The repairs increase the value of the piece. The restaurant owner was also a master at Kintsugi and shared some of his pieces. It was a privilege to hear his presentation.

Tuesday was our last day. Some of us took an extra side trip in the morning to Fushimi Inari Shinto Shrine. Inari is the God of rice and the fox is his messenger. The Temple has thousand of Torii gate, vermillion in color, they straddle the paths through the woods to the top of Mount Inari. We did not go to the top, we did not have enough time. On the way down we stopped a spot where we could make a wish to Inari. There was a large rock and if you could lift it after you made your wish it was a sign that it would come true. I lifted the rock over my head to make sure Inari saw it.

The main presentation of the day was Noh theater. Noh, according to a recent article in the New Yorker, is the oldest form of theater in the world. Some of us tried on costumes and masks. We wore the special socks worn by the actors ( again only men are members of the theater). We heard samples of the music. It was a very enjoyable presentation.

Following the presentation, I went to the Ikebana Museum and the temple of the Buddhists Monk who founded Ikebana.

The evening was our farewell dinner. The travel group was small and unique. The guides and presenters were all able to convey their knowledge and share their culture. It was an extraordinary trip. After two cancelations because of covid we felt lucky to be in Japan. The exchange rate favored the American dollar for the first time in years. Our group was smaller than most groups and only people in a tour group were being admitted to the country. I didn’t love all the food but I always appreciated the presentation. The hospitality, cleanliness and graciousness of the people was lovely. As one of my friends commented, Road Scholar out did themselves on this tour. 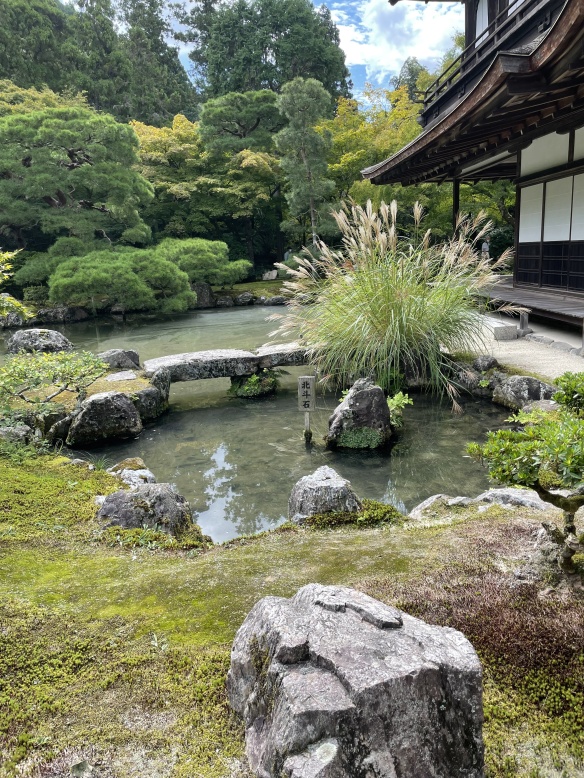 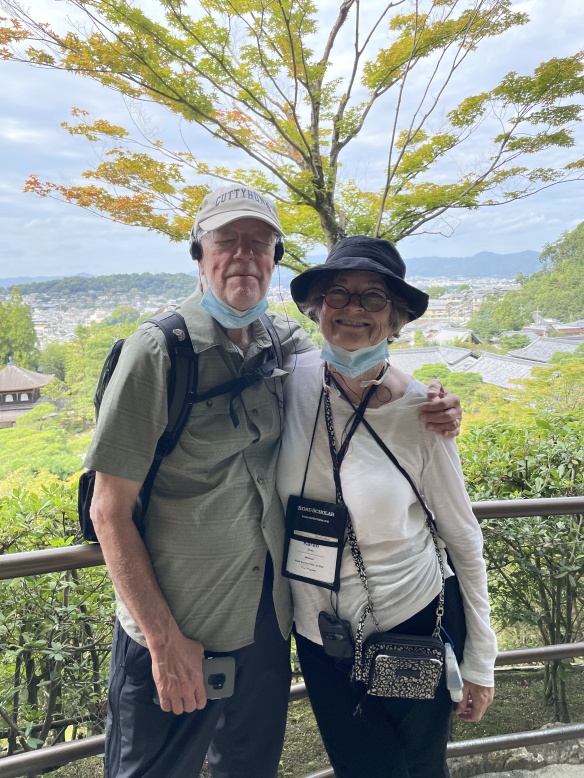 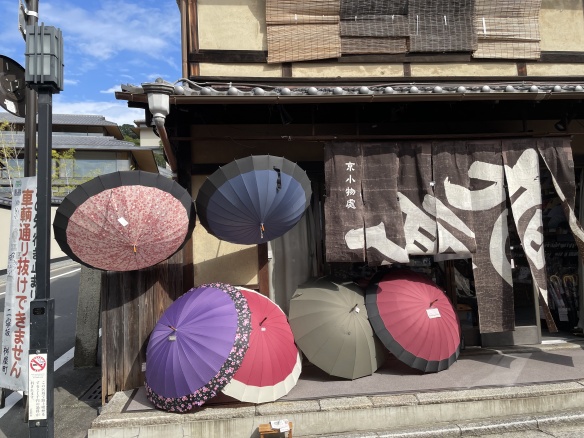 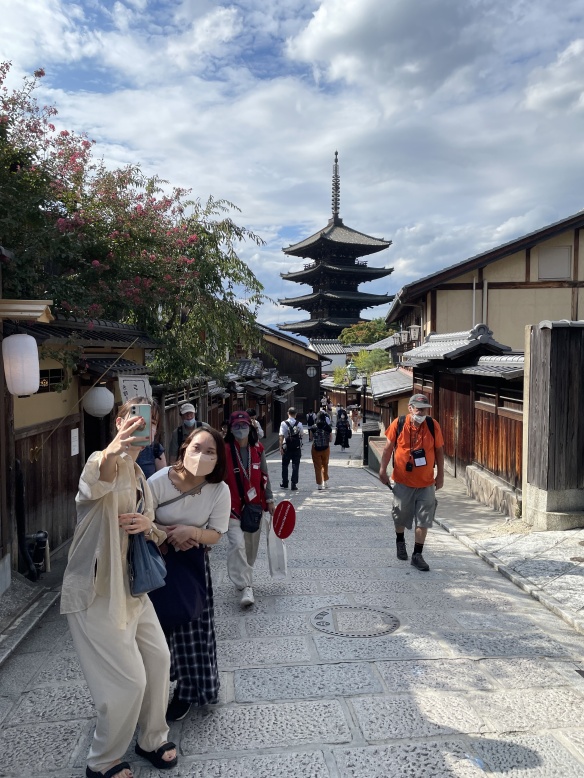 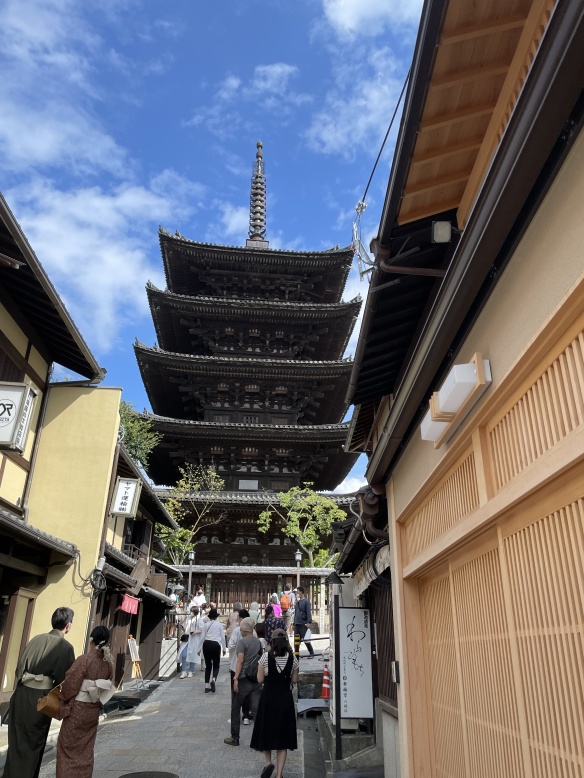 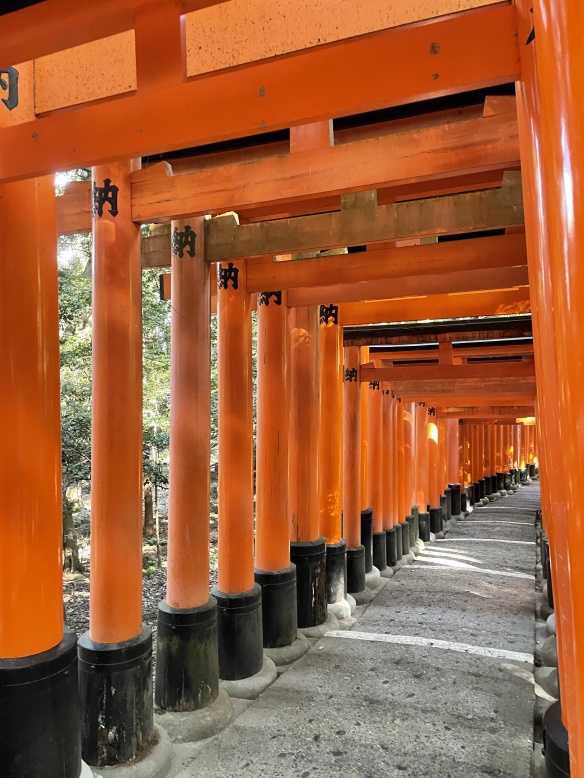 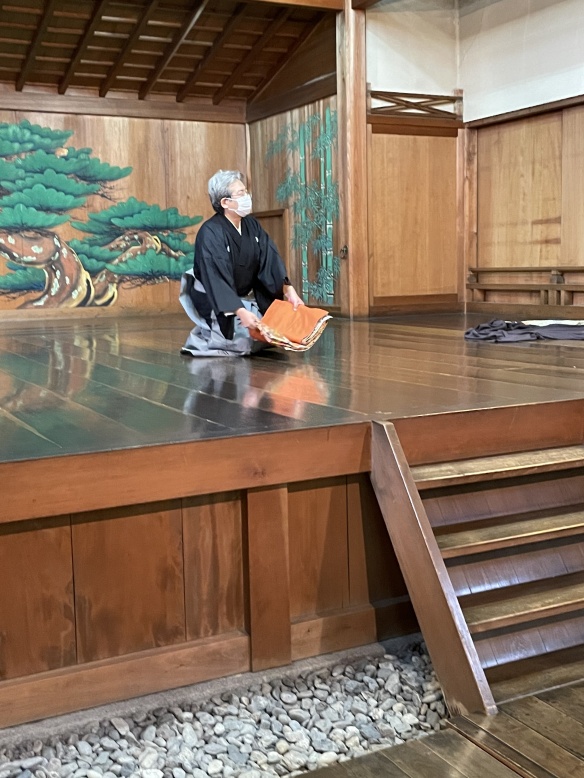 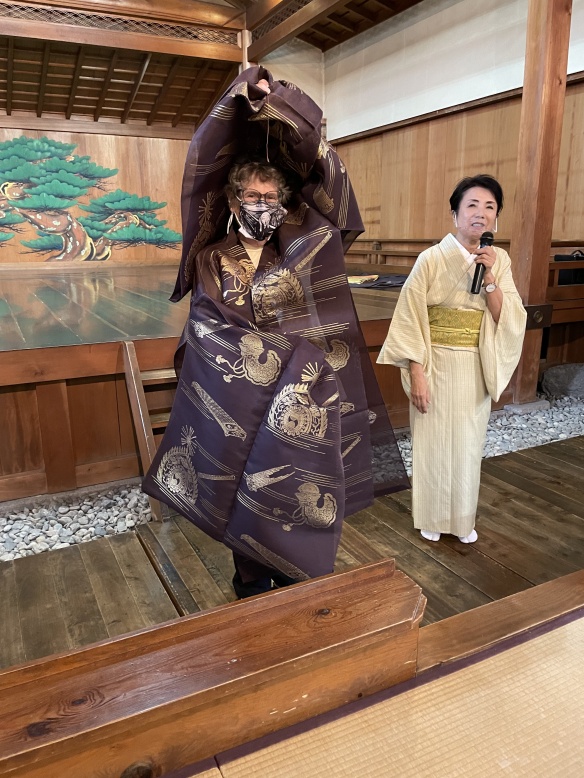