I am little frustrated with my posts. I worked hard to clean up my blog and learn new techniques for media presentation and the gallery option is not working with my ipad

We did not change locations today, we explored this area. It was very relaxing. One of the original plans for this trip was to have Diane Cupps and her husband Jerry travel with us. We would have rented a car and traveled without a guide. If that option had worked out I am pretty sure we Jerry would have exhausted and nagged to death.

Our first stop was Godifloss the falls of the Gods. The decision about Iceland’s state religion, paganism or Christianity fell to one parliamentarian. He voted for Christianity, went home and threw all his pagan gods to the bottom of the falls on his property. The falls are now called TheFalls of the gods.

The Black Castles, were the second stop, very reminiscent of the hoodoos in Bryce Canyon. This was a lovely spot but the highlight for me was seeing the mother and baby sheep moving through the hills. The area is very uneven, filled with volcanic rock. American astronauts were trained here for the moon walk. Many American movies are also filmed here because of the other world landscape.

After lunch we walked around volcano craters. Volcanoes have shaped the land for centuries. They are currently awaiting 2 eruptions, one very small, the locals call these tourist eruptions and one that will rival the one that shut down European airports several years ago.

Our last stop was Krafal, the bubbling mud pots. The mud pots erupt without warning in these fields. The mud is about 180 degrees. Several,tourist have been badly burned over the years. The air reeks of sulphur and the surroundings are cloaked in steam.

Tonight after dinner we shared and critiqued our photos…. Very nerve wracking comparing photos with all these photo experts.

fall of the Gods. Gotifloss 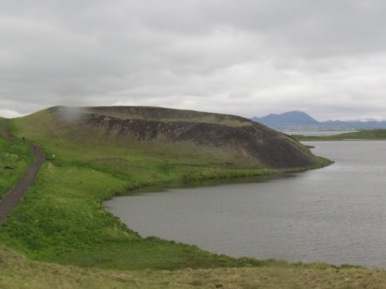 crater from a volcano 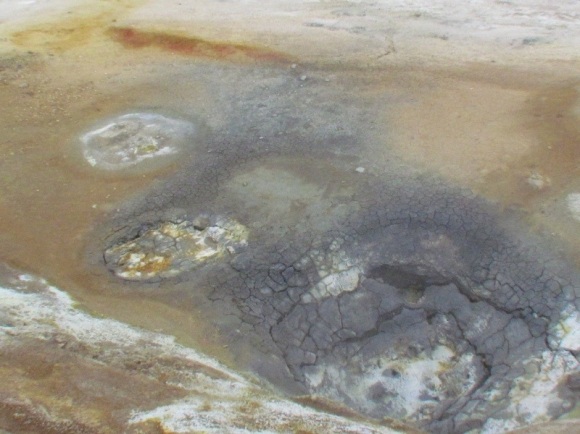 What readers are saying