The morning was full of promise, we were boarding a boat to see two glaciers. I had my seasickness preventive patch on, lunch was to be prime rib, this was our last event. We saw otters playing in Resurrection Bay. Soon there were Orcas and Humpbacks breaching and blowing. What could be better? The light played on the mountains causing the minerals glimmer in the sun, the sea breeze was refreshing. We passed Bear Glacier and headed to the outlet to enter Aialik pass. At the being of the trip, the Captain warned us that if the waters were rough we would not go see the big glaciers, it was possible we would stay in Resurrection Bay.

The Captain announced that we should return to our seats because he was going to try the rough waters around the cape and try to enter the fjord. As I descended the stairs I saw the crew hustling around with little white bags, big plastic bags, napkins and ginger ale.

For the next 30 minutes, I was sure I was going to die.

After we entered Aialik Bay things improved. We saw the glaciers, we saw the calves, we heard the cracking and groaning of the ice.

But then there was the trip back to port with a repeat of the previous performance.

Again, once we entered the bay life was good. There were Orcas, Humpback Whales, glorious rock formations, mountains, waterfalls and fresh cool showers. What a way to end the trip.

###Please note these are some of the worst pictures of the trip..maybe the year. 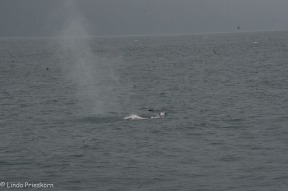 2 thoughts on “Flukes and Pukes”